Once a grand stately home and the centrepiece of the Kirklinton Estate in Cumbria, Kirklinton Hall is now on the market through Galbraith, offering the opportunity to rebuild and restore the remains of this historic property and create a home of great distinction. 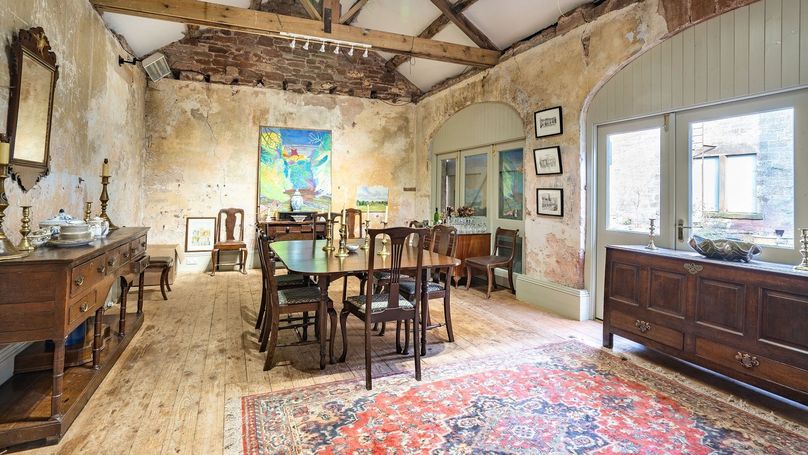 The Grade-II listed mansion enjoys a rich and varied history. The oldest part of the structure is a medieval Pele Tower or fortified house at the western end, built to protect against Scottish incursions in the fourteenth and fifteenth centuries.

In the 20th century the property was used as an RAF base, a school, a hotel, and a nightclub and casino hosting high-stakes gambling parties!

The current owners have secured planning permission to create a nine-bedroom home, in keeping with the architectural legacy of the property. The stone façade, with its attractive bow windows and ornate Dutch gables, still stands and will form the cornerstone of the new dwelling.

Sam Gibson, head of residential agency for Galbraith in the north of England said: “This is probably the most exciting building project anywhere in the UK. The purchaser has the opportunity to restore this stunning country house, with considerable scope to put their own stamp on the design and to decide on the scale of the accommodation.

“The planning permission offers appealing versatility, allowing the next owner to complete the renovation to meet their requirements and achieve an unsurpassed private home, with beautiful gardens and policies set amidst the picturesque scenery of Cumbria .”

Detailed architectural plans have been drawn up to complete the renovations of the Hall. As currently set out, these include: dining room, kitchen, utility room, cloakroom, boot room, breakfast room, conservatory, an impressive main hall, covered terrace and study on the ground floor with wine cellars on the lower floor.

Upstairs the proposed accommodation includes on the first floor a drawing room, master bedroom with en-suite bathroom and dressing room, and three further bedrooms, with en-suite bathrooms. The second floor would have a library, tower room, five bedrooms (two en-suite) and bathroom. There is also an attic level which could be used for a variety of purposes.

An annex has already been refurbished which could provide a useful base for the purchaser while the works are completed. The plans also envisage conversion of some of the outbuildings into two separate cottages.

The property has 13.6 acres of delightful gardens and grounds including formal terraces, a water garden, walled garden, orchard, a productive kitchen garden and a paddock. A pretty brook runs through the grounds leading to a waterfall and the Faerie Glen – a romantic woodland walk.

The grounds have been partially restored and are open to the public on occasion during the summer months.

Kirklinton Hall is surrounded by the beautiful countryside of Cumbria, and within easy reach of the Lake District and the unspoilt coastline of the Solway Firth and south west Scotland.

The nearest settlements are the market towns of Longtown and Brampton.

Carlisle, eight miles distant, offers a wider range of amenities and an airport with landing strip for private aircraft. Edinburgh is about two hours by car and Newcastle is about an hour away.

Kirklinton Hall is for sale through Galbraith for offers over £450,000.