Specialists in rural sales and land management, CKD Galbraith has conducted an annual review of their farm sales for 2013 at a time when prices were driven up as a result of the high levels of demand and a shortage of land available.

CKD Galbraith has experienced a particularly successful 2013 being the leading firm in terms of the number of farm sales completed throughout the year, selling 39 farms with some substantial sales including six farms being over 500 acres in size. This equates to over 8,350 acres of commercial farmland being sold by the firm in 2013 at a value of just under 52 million.

Of the 39 farms sold by the firm last year, three were in Fife with sales totalling 968 acres and worth in excess of 7.2 million. The average price achieved for good quality arable farmland in Fife has ranged between 6000 - 7500 per acre.

One of the substantial farms sold by CKD Galbraith in Fife was Easter Kincaple farm, by St Andrews. A prime arable farm, about 560 acres in all with a well presented farmhouse and an extensive range of buildings. One of the smaller units sold was Kilgowrieknowe by Falkland which was sold in lots to a mix of local farmers and investors.

In recent years very few large units have come up for sale in the area, therefore when a useful block of arable land, which has been well managed and in accessible locations is brought to the market and with the appropriate lotting it will attract considerable interest at closing date.

Duncan Barrie, Senior Associate and who manages the farm sales department within the Stirling Office of CKD Galbraith's farm division, said: "The farmland market in Scotland is still very buoyant and our figures for 2013 demonstrate a healthy picture. Farmland is often viewed as a safe haven' during times of economic turmoil as it remains a less volatile asset than residential or commercial property and we have continued to witness ongoing interest from non-farming parties as an alternative investment opportunity.

"Land prices should remain stable throughout 2014 after increasing last year, a trend which was influenced by the high demand for farmland suitable for vegetable, root crop, cereal and livestock production combined with high price of land elsewhere in the UK. Stimulus in price changes will likely come from greater focus on productivity per acre over any other factor so whilst there has been a slight increase we do not expect a significant shift in land prices over the coming year.  The Scottish referendum question has had no influence to date in the farmland market.

"Much of the interest in farms last year came from neighbouring and local farmers who have been particularly keen to increase the size of their bare land holding and benefit from economies of scale, as well as interest being experienced from English and European buyers.

"Once again good arable farms on the East Coast have sold extremely quickly with competing offers received at closing dates. Mixed stock farms were also in high demand with livestock farms sales having been slightly slower due to funding availability and the need to sell an existing holding before being able to purchase another. Furthermore, the recent drop in finished cattle prices does not appear to have had much of a detrimental impact on the levels of interest for bare agricultural land in primarily livestock areas."

The firm has also been active in the private farmland sales market throughout Scotland and has also conducted sales in Northern England, achieving good results.

CKD Galbraith has enjoyed substantial growth in both the number of farms sold and the level of experience it can offer to clients. In particular, Ian Hope who is a Partner in the Alyth office, has unrivalled knowledge of the farmland market in Perthshire and Angus providing advice on both private and open market sales in this high value market where prices in excess of 10,000 per acre have been achieved.

The firm's breadth and quality of expertise in the rural sector also includes a team of seven qualified AMC agents operating across its regional networks, lead by partner, Robert Taylor in the Ayr office. 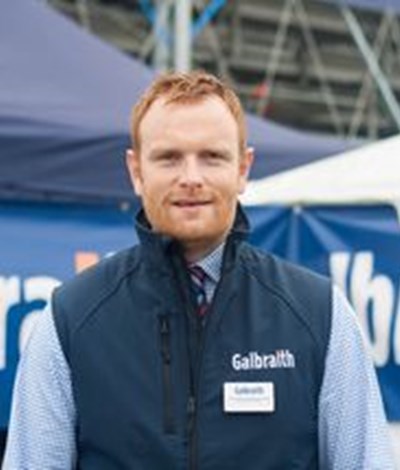