West Renfrewshire Young Farmers Club have come out on top of this years National Bale Art Competition. Their entry- A large lego farmer, currently flexing at passing cars on the roundabout at Lochwinnoch off the A737- caught judges’ attention with its brightness and simple message. The competition- which this year is highlighting “FarmStrong Scotland”- featured artworks from 62 separate Young Farmers Clubs from across Scotland. 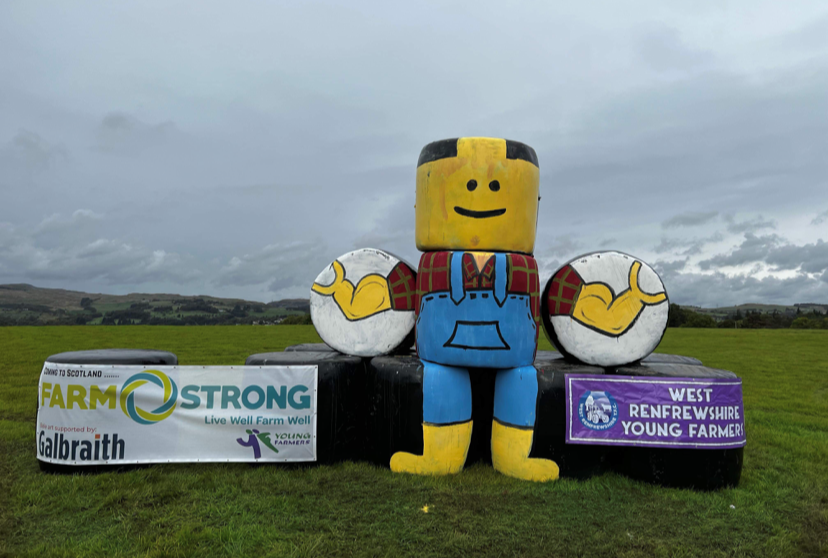 Over the last week, clubs have constructed fabulous bale structures in roadside fields throughout our beautiful countryside. There was no overarching theme for the entries, but each club did display banners highlighting “FarmStrong Scotland”- a new rural health and wellbeing initiative being rolled out this winter. The standard of entries was phenomenal this year and the association have been thoroughly impressed by their members creativity and resourcefulness.

After Representatives from FarmStrong whittled down the initial pool of entries to a top 20 (A tough task as it is!). It was down to Edinburgh and Scotland Rugby’s Sam Skinner and Phillipa Orr of Competitions Sponsors Galbraith to decide on our top three. Sam and Philippa had their work cut out with the variety and standard of the entries placed in front of them. But after much deliberation and passing back and forth between their top picks they were eventually able to settle on their winners.

Coming in third place, Carluke Young Farmers Club’s entry showed off their impressive building skills. Their Bale Strongman towers over the surrounding Lanarkshire countryside, even dwarfing the tractors that can be seen in the background of their submission photo. Guest judge Sam described the structure as “immense”.

Second Place Entry, Bathgate J.A.C charmed the judges with their strong and simple cow design, coupled with the message to “keep talking to one an-udder” which encapsulates the mental wellbeing side of FarmStrong well

West Renfrewshire’s winning entry won the day with the simplicity of it’s execution with Sam saying “it really grabbed our attention, with it’s clear message as well as looking fantastic”.

SAYFC would like to thank all property owners for allowing the eye catching designs to be positioned on their land, capturing public attention and raising awareness for FarmStrong Scotland.