Gilda Walsh ﬁnds out how the Agricultural Mortgage Corporation has helped to create the success story of Auchinleck Estate. 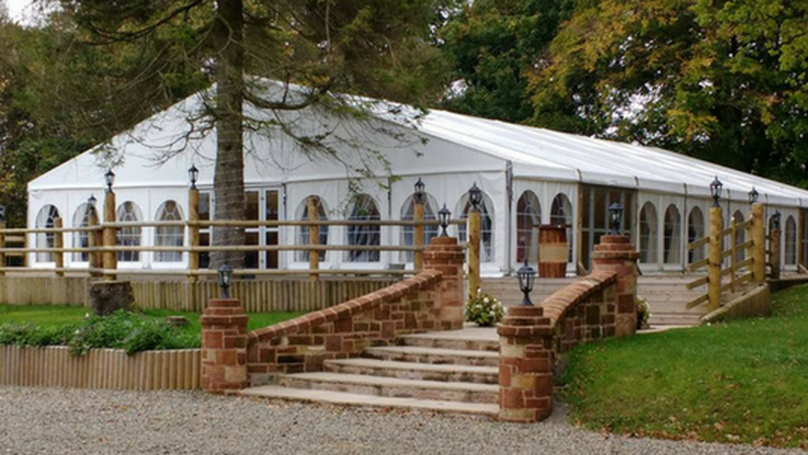 Like many young driven estate owners, Rory Boswell returned from university and realised a new direction was needed if Auchinleck Estate, Ayrshire, was to remain a viable business.

He also realised the best way to achieve this was by using some of the estate’s existing assets to create a new source of income, thus helping to future-proof the estate business. In 2008 the future of Auchinleck Estate, which has been in the Boswell family since 1504, was decided with the creation of an estate management plan that would see the old coach house restored and turned into a hub for the local community.

With a vernacular building grant through the SRDP, rooﬁng and structural repairs were carried out along with the addition of new doors and windows. The building was wind and water tight and structurally ready for use, but the elephant in the room was what to do with this amazing space.

Working through overdrafts and other lending streams, Rory had managed to fund the restoration project, but back then the banks were not in a position to help rural businesses. It had been diﬃcult for Rory to get funding to start diversifying Auchinleck Estate – until he was made aware of the Agricultural Mortgage Corporation (AMC). Rory said:

I couldn’t believe how simple the process with AMC was and the relief it oﬀered. We were able to consolidate all our loans into one payment, simplifying things and saving us a lot of money.

It was without doubt the cheapest way for us to borrow money and move this project forward, giving us some ﬂexibility but importantly allowing us to develop our vision of setting up Boswell’s Coach House coﬀee and gift shop. This would allow us to open up part of the estate to the public, adding value and providing an income stream whilst at the same time making this a destination day out along with the likes of Dumfries House or Culzean Castle.

Things have developed signiﬁcantly since the coﬀee shop opened in spring 2014, adapting and expanding in response to growing customer needs. The kitchen has been upgraded to oﬀer a wider daytime restaurant menu including special dishes such as pigeon or pheasant from the estate.

A hidden gem in the Scottish wedding scene

The estate now also hosts weddings, with bookings being taken as far ahead as 2020.

The idea to accommodate weddings was cemented while Rory was digging up the ground at the old stables and he was approached by a customer admiring the location. He ended up explaining how he thought it would be a wonderful spot for a wedding marquee and she booked up two weeks later.

Having secured nine wedding bookings, Rory enlisted the services of Robert Taylor at Galbraith to help develop a viable wedding business proposal and to approach AMC to secure a second loan to further diversify the estate.

We borrowed again, and AMC were fabulously easy about it all. They really look at business plans and because AMC agents such as Robert have their own businesses and have worked in the industry, they understand estate business plans, and not only agriculturally. They know diversiﬁcation is a big part of a modern estate.

The Auchinleck approach to weddings is very traditional, echoing old farm weddings where the family were heavily involved and would spend the week preparing for the event. The estate only hosts one wedding a week and about 30 a year, allowing it to oﬀer a personalised experience and make the venue available for the full week of the celebrations –a hidden gem in the Scottish wedding scene.

Rural businesses often ﬁnd it hard to plan ahead ﬁnancially – who knows what prime stock will be selling for in two years’ time? – so booking weddings two years in advance helps the estate to forecast future earnings.

Rory is a man of vision and reckons he has about ten new ideas a day. Next on his list is ‘Boswell Beef’ and maybe even lamb as part of a plan to set up an estate farm shop with other produce such as milk, cheese, tablet and bread from local suppliers. He says:

We want to get the estate to the point of being an economic bubble, able to support itself. It is all thanks to AMC for getting us on the road to success. I am conﬁdent that the legacy of Auchinleck Estate will live on for generations to come.

Galbraith has helped a number of rural businesses secure AMC loans to diversify, with clients using their estates’ varied assets such as rivers to create hydro schemes, develop new crops like tea, host music festivals and set up distilleries.

AMC has provided the Boswell family with long-term support. This is one of its main unique selling points. Its ability to “lend and leave” meant that the family could get on with doing what they do best and were not beholden to annual reviews and the continuing scrutiny on which some commercial lenders insist.

As an AMC agent, I am able to arrange the loans and also provide the security valuations to AMC which means everything is done in house with no third party involvement, and this provides a signiﬁcant degree of control over the whole process of providing funding.

Having returned to Auchinleck Estate to provide the Boswell family with their second loan for the wedding venue, I was able to see the ﬁnished article at the Boswell Coach House coﬀee and gift shop and it was clear the careful investment the family had made was now bearing fruit.

Not only have they turned around redundant traditional estate buildings, they have increased the value of their estate and at the same time generated fresh income streams.

AMC was delighted to continue to support the family in their next venture of providing ﬁrst-class facilities for weddings and will certainly be keen to provide further support if it’s called upon again in the future.

Contact Robert Taylor on robert.taylor@galbraithgroup.com or 07585901847 to discuss any diversiﬁcation ideas and ﬁnd out how AMC could support your next business venture.