Insights Back to the future: A 50 year old idea shows the way ahead

Back to the future: A 50 year old idea shows the way ahead

Doubling the size of a power station inside a Scottish mountain could help to balance energy supply and demand, says Ross Galbraith, group hydro manager of ScottishPower. 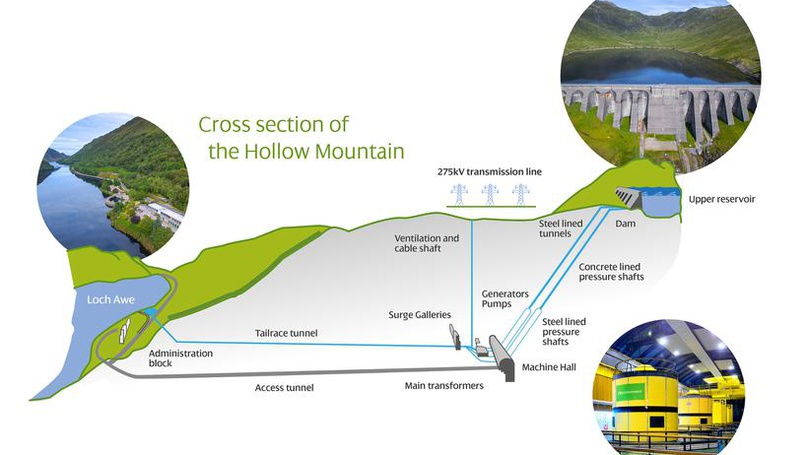 Cruachan Power Station truly is a gem. Its sheer ingenuity thoroughly impresses me every single day.

The concept is straightforward: the station stores water in a reservoir half-way up Ben Cruachan, ready to release it and generate electricity from turbines deep inside the mountain when demand is high. When demand is low, Cruachan uses excess electricity from the grid to pump water from Loch Awe back up the mountain to store in the reservoir. It acts like a battery, regularly being recharged, and helping to balance supply and demand on the national grid.

Building Cruachan a little over 50 years ago was far from simple. The design was a complex feat of engineering, and it was a mammoth task to construct it. The genius of Sir Edward MacColl's initial design, coupled with the skill and determination over six years from the 4,000 strong workforce, ensured that it was built to last.

Half a century on, as we generate more electricity from wind power, Cruachan is as important as ever. When the wind is blowing at times of low demand, we need ways to store that power. Pumped storage hydro is the most cost-effective and well-developed large scale electricity storage technology in existence, so we have spent the last two years working on a project to see if it is possible to increase the size of Cruachan. Our findings show that we could double capacity, with investment of between 300 million and 400 million. To deliver this, we would need to excavate a new cavern within Ben Cruachan, and new dams would be constructed to increase the capacity of the upper reservoir. It would take at least eight years to build, and would require up to 800 workers for the main construction phase.

The first step is complete. We know that the project is physically and technically possible. Now we need to consider the next steps. Part of this will include discussions with government and regulators on potential support mechanisms, to understand if the UK wants a new generation of pumped storage hydro.

If the project is taken forward, as we hope it can be, we will need to finalise a design. This will see us working with a wide range of environmental groups, planners and community groups. Building new dams and hollowing out a mountain to install a network of pipes, tunnels and turbines would be a major engineering project, and one that would require the utmost care for the surrounding environment.

In a world of fast-paced technological developments, it is rare to turn to a 50 year old concept to support the future needs of an industry. But Cruachan works, and the technology is more important than ever in supporting the UK's green energy ambitions.