Hugo Remnant explores the many theories around declining salmon numbers. 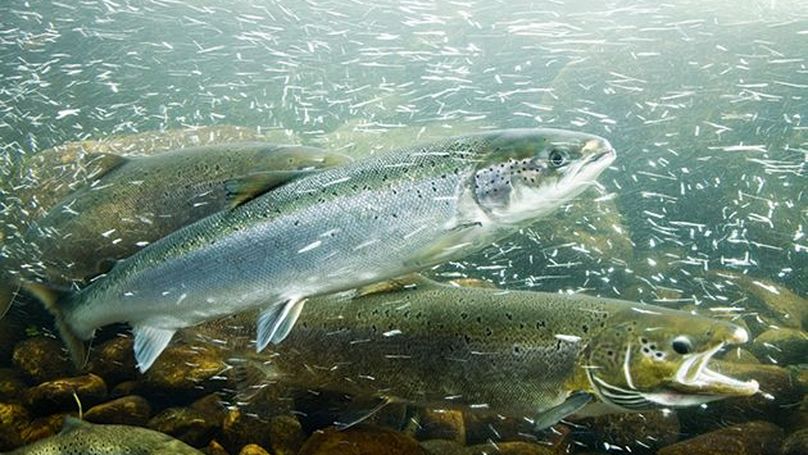 Concerns continue to grow about the future of salmon in the North Atlantic, particularly at the southern limits of its range with ﬁsh in France and Spain now almost entirely absent and another poor run of ﬁsh in Southern England and Wales in 2019.

I write this from Northumberland, where the River Tyne has been consistently good for the past 20 years. The river had an encouraging run of ﬁsh again last year until early-August, when the numbers declined dramatically to about 50% of the ﬁve-year average for the 2019 season.

In the past ﬁve years, there has been a trend to an earlier summer run of ﬁsh, with good numbers in June, July and August and fewer salmon entering the river in September and October, though still in substantial numbers. Now there is uncertainty about exactly what is happening to the run on the Tyne.

There is a parallel reduction in migratory ﬁsh counts on the neighboring river Wear, where the 2019 numbers are down even more.

A number of theories are being oﬀered to explain this. They include unusually high water for the second half of the summer so that the ﬁsh swam round the counter; alterations to the weir at the ﬁsh counter location acting as a barrier; and storm Desmond in December 2015 washing out that year’s redds (and so losing a year’s reproduction that would have shown up in the numbers of adult salmon returning to the river four years later).

Whatever the causes of the lower salmon run on the Tyne, the fact is that the autumn run in scotland has been largely absent since 2014 and in a worst case scenario 2019’s back-end Tyne ﬁshing may become the new normal.

Wider theories about the general decline include speculation that certain rivers are transitioning from an autumn to a spring dominance in terms of their main run of ﬁsh. This has happened before and it is a process that has historically taken 10 years or more, during which period catches are poor.

There are of course a signiﬁcant number of factors at play, but, interestingly, it is also reported that our smolts are getting smaller. smaller smolts do not swim as fast as larger ones, so cannot escape predation so well and do not have the same reserves to see them through the ﬁrst few weeks at sea.

There appears also to be a tendency towards an earlier downstream run of smolts going to the sea for the ﬁrst time in the spring, arriving in the estuary when there is little food available.

However, our scientist friends are quick to point out that one year’s data does not constitute atrend.

Tyne rivers Trust continues to do great work at making the Tyne catchment more resilient, with a view to producing more smolts. If we are losing a higher proportion of our smolts at sea, then we can oﬀset this decline by ensuring that the river is as productive as possible; more smolts will lead to more returning adult salmon if the attrition rate at sea remains constant, albeit high. The new emphasis on the environment in post-Brexit agricultural policy should provide a valuable opportunity for farmers to improve the condition of the river at a catchment scale.

There is scope also for the research being carried out by the Atlantic salmon Trust – the Missing salmon Project – being undertaken on an english river so that we can safeguard the smolt run in future years. The Tyne has proven remarkably resilient for the last 20 years and we want to see its recovery continue in 2020 and beyond.